On a recent warm autumn afternoon, two friends and I set off for to Maine to climb Katahdin.  Come along.

For much of my adult life, it has been the ragged mythos of the rugged West that has captured my attention and attracted my body.  If East was Home, and with it safety and familiarity, West was wildness, adventure, and an ineffable invitation to confront the unknown.  However, throughout it all, the stand-alone mountain in northern Maine, called Katahdin, has called to me from the East with the same sense of sacred Mystery.

When soul brother Reed (of corn-hole infamy) mentioned that he’d be in New England this Fall, and that we should climb the mountain that Thoreau described as being of “the most treacherous and porous country,”I fairly leaped at the chance.   Lucky for us, another dear brother, Jefe, also jumped on board, and the three of us rocketed across northern New England in my silver Subaru.  Driving in later afternoon light, we studied Fall’s firework hills, read the creative Trump signs adorning crumbling barns, and stop often to peer at rivers and study the terrain.

Similar to areas in the West, you can mark much of this north country by how recently it’s been logged–– one mile of road is a dappled disco of foliage shining down from overhanging, mature maples, while the next mile will be lined with the crowded thickets of recent clear-cuts growing back dense and tight.  It may be rural and wild out here, but that doesn’t mean there’s any absence of the human touch.

We arrive at Baxter State Park well after dark to find that the park is closed: our reservation means nothing.  Alas, after some haggling with the taciturn but reasonable park ranger, he directs us to a semi-legal camp-site a few miles back.

After a brief sleep beneath star-lit power-lines, we rumble into the Park as the gate opens as 6.  Oatmeal and coffee, yogurt and yoga, in the pre-dawn dusk. 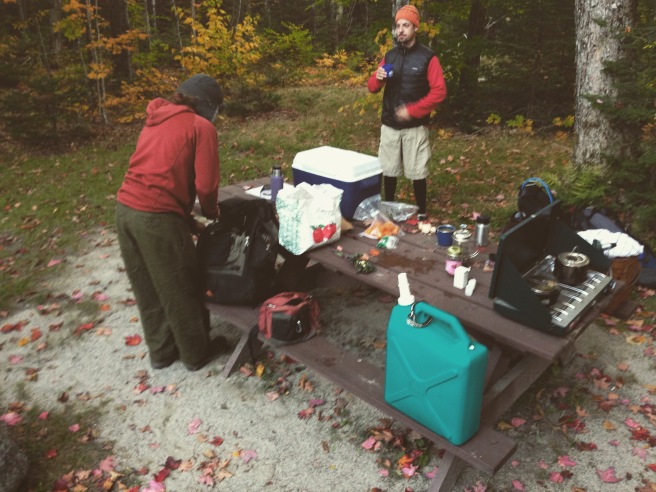 As dawn begins to light the golden birch leaves like so many paper bulbs, we hit the trail with cold hands and wily grins.  Within a mile, we come upon the sign below. .. Wilderness as Danger, Wilderness Management as having to worry about modern people who have lost the art of Walking…

As we loosen narrative formations…

We find the Poet’s Perch, put on all of our layers, and settle in.

Note the black bear on the upper blueberry slopes.

Wilderness as a place of non-ordinary states of time: time to do things like read poems aloud to your friends.

I read aloud, now, from my copy of Han Shan’s “Cold Mountain Poems.” These short poems come from 9th century China, were translated by Gary Snyder in the 1970’s, and this particular book was given to me by wolf friend Jon Turner.

My cold hands on the book’s smooth paper, my voice bell-clear, ringing the atmosphere:

“Spring-water in the green creek is clear

Moon-light on Cold Mountain is white

Silent knowledge — the spirit is enlighted of itself

“Once at Cold Mountain, troubles cease––

“I’ve lived at Cold Mountain — how many autumns.

Alone, I hum a song — utterly without regret.

Hungry, I eat one grain of Immortal-medicine

Mind solid and sharp; leaning on a stone.”

Observations and Experiences in the Kwenitekw Dawnland

Global issues, travel, photography & fashion. Drifting across the globe; the world is my oyster, my oyster through a lens.

A blog about travel, travel without money and gift economies

A Journal of Creative Nonfiction

Spreading the permaculture word - Create your own environment!

The online home of The Salon: A Journal of Poetry & Fiction

the living writing of Trevien Stanger